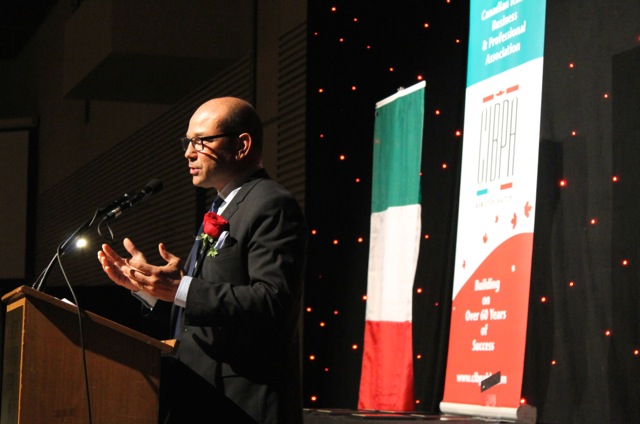 On Monday September 29, 2014 the Canadian Italian Business and Professional Association (CIBPA) held its annual awards gala dinner at the Hamilton Convention Centre. CIBPA is a not-for-profit organization, established in 1949, with the mandate to promote and strengthen the image of businesses and entrepreneurs across Canada whom are of Italian heritage. Having originated in Montreal as its sole chapter, CIBPA has since expanded to 14 chapters ranging from Vancouver to Halifax. Aside from providing an environment where members can cultivate and pursue their professional interests through various avenues, CIBPA chapters across Canada are also extremely active within their own communities having distributed over $9 million to various Canadian community based charities and education programs.

The recipient of the prestigious 2014 Business Excellence Award was Fred Losani, CEO of Losani Homes. After having opened its doors in 1976 by Giovanni Losani, an Italian immigrant himself, Losani Homes has grown to become Hamilton's most decorated homebuilder. In addition to over 100 various homebuilding awards, ranging from their local markets to Canada wide, Losani Homes has been named as one of Canada's 50 Best Managed Companies an astounding seven straight years, obtaining platinum status. A feat no other homebuilder in Canada can make claim. In addition, the company has been awarded the Consumer's Choice Award for quality and service in the Hamilton region.

Fred Losani was an easy choice for this year's prestigious award as he exemplifies all the same values that CIBPA do across their collective chapters and as an organization as a whole. Under the leadership of Fred, and his brother Lino Losani, Losani Homes has embraced every opportunity to give back to their own community. Through expeditions to the North and South Pole, Fred was decisive in helping raising over $2 million for the "Top of the World Charity". Not satisfied there, he hiked nearly the entire length of the Bruce Trail over the course of 30 days for the "Bruce Trail Expedition for Kids", in the process being awarded the prestigious Calypso Award.

Upon his receiving of the Business Excellence award, he humbly gave thanks and directed all credit to his parents and staff while using the platform to discuss his latest charitable endeavor. After establishing the Losani Family Foundation in 2013, the Losani Family worked very closely with organizations via the Adopt a Village Campaign to help break the cycle of poverty and empower our local youth and their families to create sustainable change. This past summer Fred took a family mission and began the massive development project which includes, but is not limited to, the establishment of the pillars of infrastructure, which include education, a clean and accessible source of water, and housing in Western Kenya. Having been deeply touched and humbled by what Fred himself describes as a truly eye opening experience, Losani Homes will participating and fundraising for the corporate service mission which will be taking place in February 2015.

Fred Losani has never let corporate success change his focus or motivation, be it professionally or otherwise. As a model citizen and Hamilton Business leader, Fred exemplifies corporate responsibility while serving as a leading individual to better not only his own community, but those abroad.