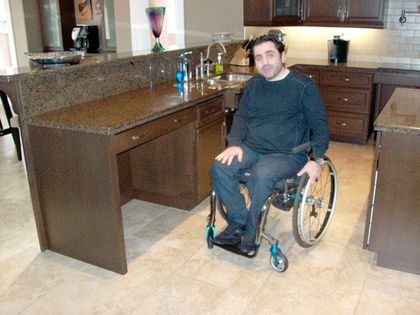 It’s now coming up to 10 years since an October 2007 ATV accident north of Thunder Bay left Domenic Cuda as a paraplegic. Reflecting back, however, he considers himself fortunate.

It could have been a lot worse, says Cuda, of the accident, in which his vehicle plunged 20 feet over an embankment, leaving him stranded in the woods for hours before help could arrive.

Cuda now spends days living his life as normally as possible, which typically may consist of gardening in the backyard, working out in the basement gym, watching TV in the recreational area with his kids, or using the home office area to coordinating fundraising for his two boys’ sports activites.

Paramount to maintaining all these activities is a home with accessibility built right in.

It also helps that the one-time employee of Losani Homes had the benefit of a personal connection with its CEO Fred Losani. Says Cuda: “I’ll never forget him (Fred) saying ‘Dom, we have got to find you a lot and do whatever it takes to make this more comfortable for you.’"

A lot became available in Spring 2010, and construction began on a 2,575 sq. ft. bungalow in Grimsby just minutes from Lake Ontario.

These days, Cuda is making it his mission to educate others about and accessibility and new homes. It helps that he has the expertise and background in construction — his job was overseeing home construction from drywall to completion — but he now also has close to a decade of experience first with retrofitting an existing home and later building a new one.

“It’s all in the details,” says Cuda who recently gave me a tour of his home located just minutes east of Hamilton. And if you did not have prior knowledge, you may not even guess this is a specially equipped home.

The bungalow has the new-home look — it’s open concept, has abundant lighting and windows throughout, and it features hand-scraped teak hardwood floors, granite countertops and all the latest in kitchen and bathroom fixtures.

As for the acessibility features, they are intended to be “‘seamless” as possible and include:

If there was one lesson learned, “it’s a heck of a lot cheaper to build from scratch then to retrofit.” says Cuda who had started some renovations to his previous Hamilton home before Losani Homes offered to help him build a new one.

For example, he estimates the built-in elevator, which travels between the basement, the garage and the main floor, costs one-third of the price than it would have to have it put in later.

But it’s not just about the cost. “A retrofit often ends up looking like a retrofit,” and that’s why it makes so much sense to build accessbility features into a new home from the outset, he says.

Reflecting on it all, Cuda says the only he misses out on is spontaneity — he must plan out each day carefully — but thanks to living in an accessible home, his independence, privacy and mobility remain intact.

WHEN IT COMES TO ACCESSIBILITY, HOME BUYERS URGED TO THINK AHEAD

If you look at accessibility in the bigger picture, new home builders may be mIssing out on an opportunity, believes Fred Losani, CEO and founder of Losani Homes.

While Losani believes the demand exists, “we have not reached the tipping point, where it’s become a standard feature, so accessibility tends to be offered as an option,” he says.

There are many levels of accessibilty, and sooner or later, every home buyer will need to consider what it means depending on their stage of life.

The current emphasis on agingin-place has Losani re-thinking how new homes are built, and at its master-planned community in East Hamilton called Central Park, buyers can opt to have an elevator installed ($54,000) or roughed-in ($7,000).

It’s not as far down the road as it sounds. Due to a lack of space and with lot sizes diminishing, builders are being forced to construct more two-, three-storey semi-detached units and townhomes, and elevators are the answer to anybody who has trouble negotiating stairs.

Sprawling bungalows such as Domenic Cuda are hard to find, says Losani, while advising home buyers to think far ahead to what their needs may be.

But it’s not just the actual home. Builders such as Losani Homes are thinking about how communities are designed and hope to give more consideration to easier access to parkland and nearby natural areas.

The Losani development in East Hamilton is minutes away from numerous natural attractions including the Bruce Trail and several waterfalls, and the plan is to modify pathways so they can be accessible for wheel chairs, baby strollers and any special needs.

Losani believes it’s never to early to think about the type of accessibility features somebody may need down the road. “I, for one, really like where I live, and I don’t want to be in a position where I have to one day move,” he says.

A recent research project commissioned by CMHC examined the cost of including features at the construction phase that could enhance the accessibility and adaptability of new homes.

This study estimated that 57% of the accessibility and adaptability features examined could be included in the construction of new homes for less than $100 each.

It estimated further that the inclusion of these features would add six to 12% to the construction of the selected designs.

The majority of seniors express a preference for aging in place. As Canada’s population ages, the construction of sustainable homes that can adapt to changing needs will benefit both the residents and their communities.

The potential benefits of adaptable features in housing could include a longer period of independent living, the retention of residents’ established support services, maintaining residents’ existing social links, and continued participation in the community.

The additional costs of including up to 60 design features to make a newly constructed home accessible or adaptable in the future are not insignificant. They are nonetheless much lower than the cost of converting an existing dwelling in order to make it accessible.

The research insight includes more detail on the project including the particular accessibility features that were addressed, and cost differences based on location and type of house.