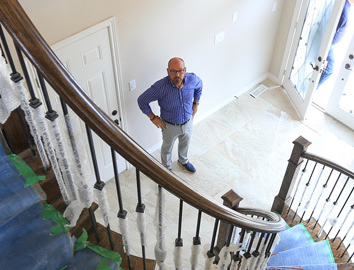 Fred Losani is a busy guy. The owner of Losani Homes has just returned from a whirlwind trip to Ecuador and Peru. But it wasn't exactly what you'd call a vacation.

Instead, he and family poured concrete and laid bricks for a new Losani Family Foundation collaboration with Free The Children for a remote medical clinic in the heart of Ecuador.

"These are the types of projects we like to do when we are not building houses," says Losani, who speaks as passionately about the charity as he does his business. His Pronto Homes on Demand program, for example, is a different way of purchasing a home. "I've been building and selling homes for over 40 years," Losani says, "but this is by far the most exciting project we've undertaken."

Losani Homes is streamlining the home-buying process by building first and selling later. His low-rise condos, townhomes and single-family detached homes in the Greater Golden Horseshoe are built to anywhere from 30 per cent to 100 per cent completion before purchase. (Prices for a single-family home range between $310,000 and $600,000 for 1,500 sq. ft. to 2,500 sq. ft.)

The Pronto program grants two advantages for buyers. They're able to walk through their new home before buying it, rather than squinting over blueprints or renderings. And it still allows buyers some level of customization, no matter the stage at which they buy.

"Even if the spec house has already been built, anything is possible," Losani says. "Let's say you want to modify the kitchen. No problem. Or let's say you want to extend the first and second floor of the house another five feet out. We'll even do that."

Mark Zwicker, principal at Architecture Unfolded, who worked on Losani's Victoria Common community in Kitchener, explains the construction process. "It's not about replicating one style of house over and over. Every unit – whether it's a condo or townhome – looks completely different.” For Victoria Common, an old industrial site from the 1800s, Zwicker says their objective was to recreate the look of an oldEnglish street with a mixture of various frontages. “From the ceiling heights to the layouts to the presence of a garage or driveway – each had a different template. So ultimately, customers really appreciate the fact that they are offered a ton of choices when it comes to the property that best suits their needs.”

The seemingly endless process of buying a home or building one from scratch, which can normally take anywhere from six months to two years, is streamlined so that buyers can move in within two to three months – sometimes even as soon as 30 days. Hence the Pronto moniker.

With the Pronto program, Losani says, there are fewer uncertain variables – the price, for example, as well as the closing and occupancy dates.

Although Losani has been building spec homes for years, the company didn't conceive of it as a branded program until recently, upon realizing an undeniable consumer trait. Customers want instant gratification.

"The whole market is changing," he says with a laugh. "Think about the way people are compulsive about eBay or Kijiji. They make the purchase and then they get the item almost immediately. You can literally go buy a car and drive it off the lot. There simply was not something in the housing industry to replicate this ease of purchase."

Doug Sloan can attest to that. He and his girlfriend had been househunting for three months before they heard about Losani Homes' Sherman Oaks community in Hamilton. "Within a few hours of calling Losani we were able to walk through our home-to-be," Sloan says. "Other homes I've purchased I bought sight unseen, but what I loved about this process was that we could actually touch and feel the fixtures and finishes."

Does Losani worry others might copy his sales model? "It's true," he says, "sometimes we are secretive about some of our concepts, but this is not one of them. It takes a lot of horsepower and resources to do what we are doing."